The Han Solo Approach To Making It

Have you ever watched a movie with one of your favorite actors and thought, “man, that guy is lucky”? All that fame and fortune, the entire world at their fingertips . . .

In reality, there’s always more to the story than just sheer “luck”.

Instead, the path to success is almost always paved with relentless hustle, endless rejection and daunting roadblocks.

And if you read between the lines, you’ll see an awful lot of parallels with the business world. There’s a constant cycle of hits and misses for us mere mortals.

But when you really dig into anyone’s success story, you’ll find one common theme about every single successful actor, business person, athlete, or (fill in the blank).

They all share a singular trait that makes success practically inevitable – they showed up. It’s that simple. Our heroes do the thing lots of us struggle with:

They consistently immerse themselves in the mission at hand.

(And it better be a mission, or you’ll fail for sure!)

For the ones who make it, they don’t fret over failures or setbacks or who else is doing what.

Before he landed the role that changed his life trajectory (and inspired legions of people to have intergalactic dreams with the Star Wars movies), he was but a freakin’ carpenter. True story!

Like most other budding actors, he landed small roles here and there, but they weren’t enough to pay the bills. So, he fell back on his carpentry skills to make ends meet.

But something curious happened along the way. As Ford noted in an interview on the Actors Studio with James Lipton, his big break happened because everybody else quit! His fellow actors, the ones who were trying to make it, gave up on their dreams and went back to wherever they came from.

Ford, on the other hand, stayed at it.

He was the guy who got rewarded just for sticking around.

One day, as George Lucas (who needs no introduction) was in the process of lining up actors to audition for Star Wars, he noticed the guy doing some carpentry work for him in his studio.

Lucas recognized the man because he’d seen him around the various Hollywood studios. The man was Harrison Ford.

And Lucas encouraged Ford to audition because he knew he was around for the long haul.

You could argue Ford got “lucky”. But as he tells it, he just remained the most visible. The right people knew who he was.

Moral of the story? You have to go where the game’s being played . . . and keep on playing.

Success isn’t as complicated as we often make it out to be. It really boils down to these three things . . .

So, ask yourself, “Am I really in this for the long haul?”

If the answer is “yes”, then odds are you’ll make it.

The only question is how fast—and that’s a topic for another time. 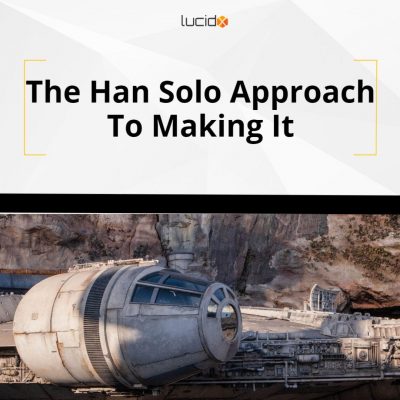